Today, the COVID-19 pandemic has affected 213 countries and regions. And, in addition to the continuing danger of the spread of the virus, there are economic and social consequences that inexorably affect the life of society. Quarantines, restrictive measures, business shutdowns, border closures – all this – will certainly hit even the most stable economy.

The corona crisis came as a surprise to everyone. Of course, in the information space, you can hear a lot of opinions regarding the consequences of the pandemic. Someone predicts terrible and irreparable consequences. Someone suggests changes that will forever enter our lives, and with which we need to come to terms. They talk about the usual way of life and work, changes in approaches to business management, purchasing habits, etc. Let’s try to figure out what economic consequences exist today and what are the predictions.

The COVID-19 pandemic has affected almost every area of the economy. The decline in business activity around the world, and in particular the stop of production in China in March 2020, caused a decrease in demand for oil and oil products. And, as a result, a drop in oil prices. Many countries have banned or restricted the crossing of their borders, which affected the import and export of goods. The areas of HoReCa and air transportation suffered greatly. Major automakers are closing factories and laying off employees.

Companies began to switch to a home office work, due to which the demand for home office goods ─ equipment and so on increased. But other items of expenditure, including the rent of office space, have dropped significantly.

Applications for video conferencing, such as Zoom, Microsoft Teams, and others, experienced a peak in popularity. As well as services for delivering groceries and food from restaurants. And of course, personal protective equipment has become an everyday commodity. 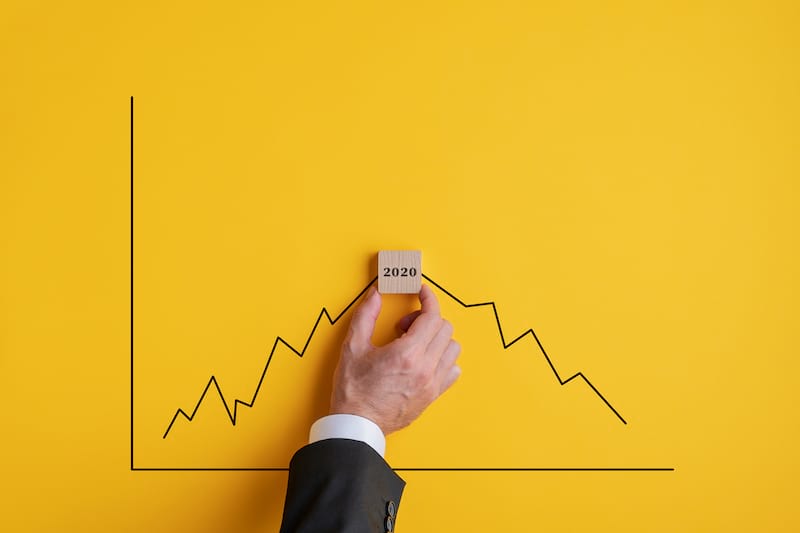 The biggest crisis since 2008 has hit jobs. For example, in April 2020, the US unemployment rate, according to the Labor Department, reached 14.7%. For comparison, in January it was 3.6%. This is the highest mark since the Second World War. Thousands of workers around the world are left without a livelihood, relying only on government assistance. The unemployment rate is, of course, a particular concern of the authorities of all countries.

GDP is the aggregate market value of final goods and services produced in a certain territory for a year. In the normal state of the economy, GDP grows due to the fact that the population is growing, and, accordingly, the needs of people, and the production of goods and services. Falling GDP is a natural sign that there are problems.

The World Bank’s predicts for 2020 have been revised down sharply. According to the baseline predict, this year the global GDP is expected to decline by 5.2%, which will plunge millions of people into poverty.

But if you try, you can find some positive aspects. For example, according to Ceyla Pazarbasioglu, Vice President of the World Bank Group for Equitable Growth, Finance and Institutions, “It can be positive that the behavioral changes caused by the pandemic stimulate the early adoption of new technologies, will lead to more efficient companies. and accelerate the pace of scientific innovation. “

The World Trade Organization (WTO) predicts a fall in the volume of trade in consumer and industrial goods by 13-23%. At the same time, WTO experts suggest that the global economic recovery in 2021 will be quite fast and growth will be 21-24% per year. For its part, the WTO is moving towards adopting measures to facilitate international trade. This was announced by the CEO in his report submitted on July 24.

In terms of further scenarios for the development of events, economists do not undertake to make forecasts for sure. Most experts agree that the crisis will be protracted. How difficult it will be is a matter of time. It will be especially hard for countries with developing economies.

Corona crisis is fraught with uncertainty. It is difficult to predict economic changes. It largely depends on the predicts of epidemiologists, the rate of spread of the virus and the search for treatments. So, in one of the forecasts of the International Monetary Fund, it was said that the economy would fall by 3% if the pandemic could be contained in the first half of 2020. And from July everything would start working as before. But that did not happen.

Now we can observe that industry and trade are beginning to recover, countries are gradually opening their borders. Nevertheless, it is too early to talk about improvements in the global economy. WHO warns that if countries do not comply with quarantine measures and recommendations for the prevention of COVID-19, then in October-November the world may be swept by a second wave of morbidity. In this case, tough restrictive measures will have to be reintroduced, borders closed, exports and imports restrained, production reduced, etc.

Summing up, such a sudden outbreak of the coronavirus pandemic led to the deepest recession in the world economy in recent decades. The final consequences are not yet clear. But it is clear that the pandemic will lead to long-term economic recession in most developing countries. At the present stage, the priority task for combating the economic consequences of the pandemic is the development of strategic actions that will be aimed at reducing economic damage and mitigating the consequences for people. Global coherence and cooperation are essential in achieving this goal.